To mark this special anniversary year the Friends of Wemyss Bay Station have produced a range of special edition cards, based on the paintings by Dugald Cameron on show in our gallery.

The front of the card, when closed, bears the crest of the Caledonian Railway Company, and the details of the anniversary date, and the back has a painting of a Wemyss Bay pug.

Wemyss Bay Station, 1865 – a Caledonian Railway train departs. This image is one of two paintings produced by Dugald Cameron to mark the 150th anniversary of the opening of the line to Wemyss Bay in 1865.

Wemyss Bay Pier in 1865. this image is one of two paintings by Dugald Cameron to mark the 150th anniversary of the opening of the line to Wemyss Bay in 1865.

2)  Blank folded card showing the 1865 station and pier in action. 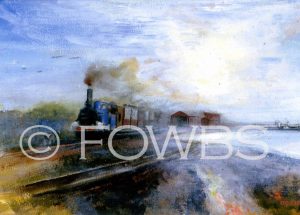 Wemyss Bay Station and pier of 1865 in action. From an original painting by Dugald Cameron.

To order these cards please visit our online shop.

Please note that the cards you buy do not have the “watermark”.