Browse: Home > About Us

The Friends formed in 2009, a group of local people who shared concern for the neglected state and appearance of the station. From 2011 to 2013, Inverclyde Council awarded the group prizes for their efforts in their annual GardenFest. In 2013 they won a a silver cup!

Despite a major programme of repair and restoration in 1994 the station’s canopies and glazed roof leaked like colanders in several places. Several of the rooms around the concourse, formerly waiting rooms, lay empty and forlorn. And the feature for which the station had been famed since it first opened, its displays of potted plants and hanging baskets, were nowhere to be seen. A modern railway no longer requires several hands to run it. One man is on duty at a time, and he has no opportunity to attend to plants.
ScotRail operates a programme called ‘Adopt a Station’, aimed principally at unmanned stations, but also available to others. Members of a local community are encouraged to take an interest in the appearance of their station, usually by installing and maintaining containers of plants, for which ScotRail supplies funding. 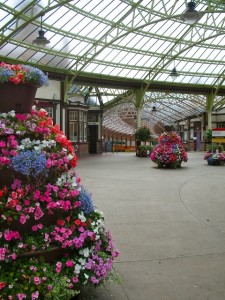 Wemyss Bay and Skelmorlie residents decided to take advantage of this offer, and formed themselves into a named group – the Friends of Wemyss Bay Station.

Starting with some tubs of plants, they have gradually expanded their activities both inside and outside the station buildings.  Towers recall the tiered displays of the past, and a Station Garden has been created on the remains of a siding which had been an eyesore for many years.  This now houses a polytunnel and some raised beds where a variety of vegetables and plants are grown.

In the empty First Class Waiting Rooms the Friends now operate a secondhand bookshop and gallery, open 6 days per week, and staffed by volunteers. The funds raised have been used to restore these neglected rooms to something of their former glory. The gallery displays an exhibition of photographs of the history of the station, and the local area, and is used for other exhibitions when required.

The rooms have become a place to visit, to spend time when waiting for train and boat, a refuge from the weather, a source of gifts with a local slant. 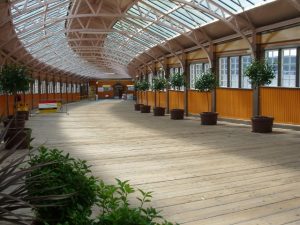 The concourse today with plants

The walkway to the pier is lined with trees 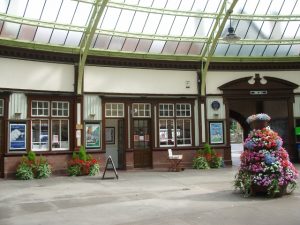 The bookshop and gallery

Membership of the Friends is open to all who are interested in the future of this last surviving example of a Clyde rail and ferry combined terminus. Wemyss Bay holds a special place in the hearts of many people, not just those who live nearby. We are keen to collect stories and photos about the station and pier, and welcome personal recollections however slight.
How to become a Friend of Wemyss Bay Station.