The Wemyss Bay railway line was opened in 1865 and the service was advertised as being superior to the line which served Greenock, as all of the carriages contained seats! The journey to Glasgow took just over an hour with a First Class return costing about 3/6 (about 22p) and Third Class 2/- (10p). Five years later (1870) the first steamer service to be run in association with the railway was started.

In the 19th century steam power had revolutionised public transport, and enabled everyone, from all levels of society, to move about the country. Before the opening of the railways, steamboats were the fastest means of transport; for example the journey from Largs to Glasgow by boat took five hours and cost 7/6d cabin fare single.   The arrival of the railway line at Wemyss Bay reduced that journey to an hour and a half, for the all-in fare of 2/7d. 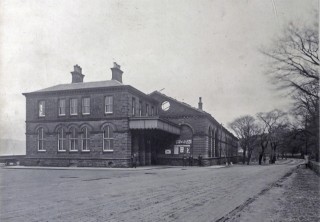 The front of the first station building of 1865, shortly before its demolition in 1903. The roof of the train shed has been dismantled. A service was maintained throughout the building of the new station.

The first station was built in 1865, with two platforms, and two steamer berths at the pier. It was a handsome Victorian villa-style building, designed to complement the large private homes which were being built, mainly in Skelmorlie but also in the developing Wemyss Bay. These were the holiday homes of wealthy Glasgow businessmen and industrialists, whose families and servants moved down to the fresh air of the coast for the summer, while father would commute to town by train without difficulty. So, although perhaps plain, it was really quite a handsome building that certainly did not “lower the tone” of the surrounding district!

The Development of Wemyss Bay Station.
The popularity of holidays on the Clyde Coast became so great that the Caledonian Railway Company had to plan for considerable extension of facilities and a new “double” line was opened in 1903. This was followed by the very handsome Edwardian style station which we enjoy today.

The present station and much improved pier were built on ground reclaimed from the sea, doubling the number of platforms and steamer berths of the previous structures. It was built within a year, while passenger services continued to operate from the old station.

At this time Wemyss Bay Pier provided ferry services to Largs, Millport, Arran, Innellan, Rothesay and the Kyles of Bute, Ardrishaig, and others. The number of passengers trying to get between train and boat led to frequent missed connections, not to mention physical discomfort in poor weather. The new station was designed with all this in mind, its most significant feature being its elaborate glazed canopies and roof, providing protection from the rain between train and boat, and also the much shorter walk between platform and pier. 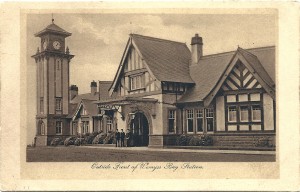 The Station Frontage in 1903, designed by James Miller, Architect, and Donald Matheson, Chief Engineer of the Caledonian Railway Company

The new complex became one of the showpieces of Scottish railways. It was dominated by the impressive sixty-foot Clock Tower, and was built in Queen Anne style, half-timbered and roughcast with sandstone facing. The large, circular glass-roofed interior became renowned for its outstanding displays of potted plants and hanging baskets, although sadly these embellishments were discontinued probably by the late 1970s or 80s.

An Edwardian masterpiece, it was the first of the Caledonian Railway Company’s Clyde railway piers to be built, and is now the only one remaining. It well deserves its Grade-A architectural listing, with its sinuous, graceful curves, and elegant glass canopies, still protecting passengers coming off the trains and heading down for the boat connection to Rothesay on the beautiful Isle of Bute.

Then it catered for crowds of holidaymakers escaping from the grime of industrial Glasgow by having a day ‘doon the watter’. Now the visitors are fewer in number, but the affection for the sail to Rothesay continues.

An early photograph of the station concourse, showing the lavish and greatly admired floral dispalys

Some facts about James Miller – Architect of the Station