Celebrating the 150th Anniversary of the Opening of the Line

Browse: Home > Celebrating the 150th Anniversary of the Opening of the Line

MV Bute got dressed specially for our anniversary, with flags flying.

On Saturday, 16th May the Friends marked a special day in the history of Wemyss Bay Station – 150 years since the opening of the railway line from Glasgow to Wemyss Bay, as a branch from Port Glasgow, on 15th May, 1865. We were restricted in our activities because the station and the pier are in the process of major repair and renovation, but we didn’t let that stop us having a celebration.

M.V.Bute got dressed overall for the occasion, with flags flying above her decks. On board were displays of models of ferries old and new, paddle steamers to car ferries. In the station gallery Dugald Cameron had produced paintings of the 1865 station and pier in action. Souvenir cards showing these images were on sale in the bookshop, and some of Dugald’s models of early Caledonian Railway locomotives were on display for that morning. 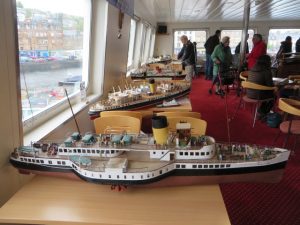 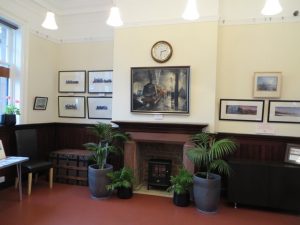 To mark this special occasion Dugald Cameron produced new paintings of the 1865 station and pier in action – seen above, on the right of the fireplace. On the left are paintings of Caledonian Railway locomotives. Above the mantelpiece is a painting of Central Station, Glasgow in January, 1964, entitled “A Time of Transition”. 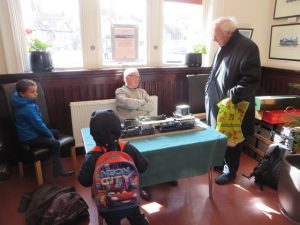 On 16th May, Dugald Cameron displayed some of his collection of model trains, which attracted some admirers, young and not so young. 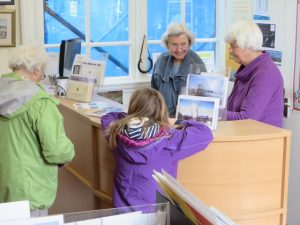 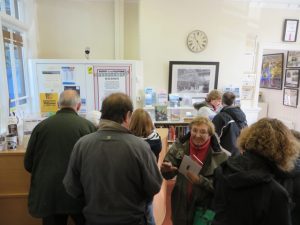 The bookshop did a roaring trade on 16th May as many people visited us in support of the anniversary.