An Extract from the GREENOCK ADVERTISER

The Greenock and Wemyss Bay line of railway is to be opened for traffic on Monday, and an excursion trip given by the contractors and engineers to about five hundred ladies and gentlemen took place yesterday. A brief sketch of its formation and route may prove interesting. The idea of forming a line of railway from Glasgow to the west of Greenock, affording convenient access to several watering places on the coast, has for years occupied attention.

In 1861 a scheme was proposed, a company formed, and a bill subsequently passed through Parliament, giving powers to construct a line of railway to Wemyss Bay, to be called “The Greenock and Wemyss Bay Railway.” The capital proposed was £120,000, which was afterwards increased to £150,000, in shares of £10 each, and the undertaking took a practical form. Contracts were obtained which stipulated that the railway was to be ready for traffic upon 1st June, 1864.

The first turf was cut during November of 1862, but the rigorous winter of that year prevented any material progress being made until the beginning of 1863. Shortly after, when operations were fairly commenced, it was found that, owing to the character of the cuttings and formation of embankments, it was impossible to have the line finished at the time fixed, and the company granted a longer term to the contractors. The district traversed by the line is familiar to our readers, but the fine scenery will be observed from a different elevation from that with which they have been acquainted. 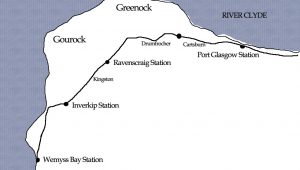 A plan of the railway as it looked in 1885. There was a station between Cartsburn and Drumfrocher, serving the heavily industrialised area with its sugar refineries and power station

The railway, which is ten and a half miles in length, branches from the Greenock section of the Caledonian Railway, about half a mile west of Port Glasgow Station, and runs in a westerly direction for several miles, ultimately taking a southerly course. The working of the line is vested in the Caledonian Company, whose announcement promises such facilities of transit and such moderate fares, as will give to the public that amount of satisfaction and security which the Greenock section of their line at present affords. The Caledonian Company receive for working and maintaining the line 50 per cent. of the profit so long as the income does not exceed £8,000, and 45 per cent. above that sum and under £12,000. The Caledonian supply all the working plant of the railway. 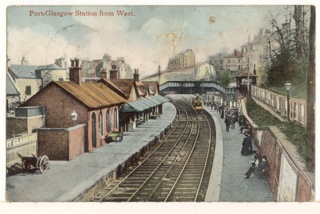 The line branches from the Greenock section of the Caledonian to the westward of Port Glasgow Station at David’s Glen. The contractors for the first five and a quarter miles of the line were Messrs Young and McCall. The Caledonian Railway at the junction is about 30 ft above high water mark, and the new railway begins an ascent on the gradient of 1 in 68, which is continued for two and a half miles until it reaches an elevation of 240 feet above the level of the sea.. At the junction a double line of rails is laid for about 300 yards, in order to give greater security for the shunting of trains.

The railway afterwards consists of a single line, but would permit of an additional line being formed, provided the traffic should at any future time require it. Proceeding through a heavy cutting, the railway continues to skirt the Caledonian line, through Gibb’s Hill Farm, Fence Wood Farm, and the farm of Brigend, at an increasing elevation. At a short distance from Brigend the “first turf” was cut on the line. The cutting here is about 320 yards in length, 50 feet deep perpendicularly, and is principally composed of a bastard freestone of great hardness.

At the end of the cutting there is a whin dyke of about 20 feet in thickness running at an angle, and here the line enters the Cartsburn tunnel, which is 285 yards long. This subterranean passage proved a work of considerable difficulty, two-thirds of the rock being bastard freestone and the remainder blue till, of great tenacity. The tunnel is 75 ft below the highest point of Bawhirley Hill, and the company considered it prudent to line it through and through with bricks, which were built with Arden lime and Roman cement – materials which have run them together like a solid wall. About one million bricks were used for this purpose. the tunnel is faced with hewn freestone at both ends, and is perfectly straight.

Shortly after leaving the tunnel the line crosses the Cartburn, passing through Strone Farm and Wellington Park, and at the top of Lynedoch Street, immediately behind the sugar refinery of Messrs Anderson, Orr and Co. The passenger station is placed on the south side of the line and is approached from the town under a bridge and up a neat carriage drive. A goods depot is proposed to be made to the north side of this station. 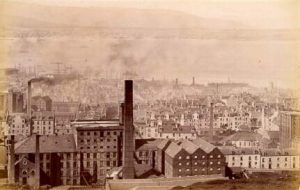 Leaving the station, the line continues to run in a westerly direction, passing through the farm of Murdieston, and over an embankment of 40 feet in height, through the Hole Farm , the railway now enters the estate of Mr Darroch of Gourock. A deep cutting of whin rock runs through Penny Fern and Auchneagh Farms. The line now winds round the base of a hill on the Branchton Farm, and skirts the turnpike road leading from Greenock to Inverkip. Emerging from the Branchton cutting , we arrive at Ravenscraig Station, erected in order to accommodate the district and inhabitants of Gourock. About 300 yards from the Ravenscraig station the line again passes through a cutting and emerges into the farm of Spango.

The railway for the next three and three quarter miles was executed by Messrs A. & K. McDonald, and is known   as the Inverkip contract. Passing through the farm of Kingston and a little to the west of Dunrod farm steading   where a discharge and loading siding is made for the accommodation of farmers in the district, we come to the river Kip which is crossed by a viaduct of four spans of 55 feet each. This viaduct is 56 feet in height, and is constructed of wrought iron girders. Passing through heavy cuttings of hard freestone on the farms of Bogside and Leap, we reach an elevated plateau from whence a delightful view of the opposite shore of the Frith may be obtained, and  then cross the Daff, a small stream, by a viaduct consisting of five spans of wrought iron girders of fifty five feet each, and at an elevation of 90 feet above the bed of the river. The gradient at this point falling towards Wemyss Bay is I in 70. The station of Inverkip is situated about 300 yards from the village, the house being built of red sandstone. Leaving the station we enter a cutting of about 250 yards in length, the depth of which is about 45 feet.

This cutting is principally through “pudding stone” and whinstone. We then enter a tunnel of 180 yards in length, which passes through Common Craig Hill. This tunnel was found to be composed of whinstone and old red sandstone, and in order to insure security, it has also been lined with brick in the same manner as the Cartsburn tunnel. Emerging from the tunnel the Frit h is again spread out to the eye. Passing through the farm of Berfern the line takes a southerly direction, and, passing over an embankment made through the farms of Finart Bog and Blueacre, we reach the end of Messrs McDonald ‘s contract. 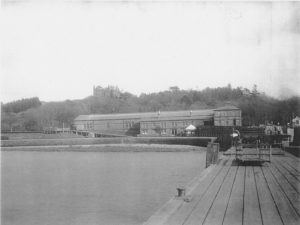 Wemyss Bay Station and pier, opened in 1865. Kelly House can be seen on the hiil above the station.

The Wemyss Bay contract, which extends from this point to the terminus and includes the station, engine house, turning table &c., was executed by Mr Hugh Kennedy. A cutting, which extends to one and a quarter miles through old red sandstone and whinstone to the depth of 35 feet, begins this contract. This cutting runs parallel with the turnpike road, and owing to the nature of the bedding of the rock much difficulty w as experienced in the excavations.

The gradient on this contract is 1 in 70, falling towards Wemyss Bay. Near the south end of the cutting, a bridge of 95 feet long , and 28 feet broad , has been erected. About half a mile from the station there is a large water tank,   and a little further south is erected a ticket platform, at which the train stops to allow the tickets to be lifted. Matchless scenery is here presented to the eye. On the one hand is the wide-spreading Firth, with the Cowal hills beyond, Rothesay and its lovely bay, and the Islands of Bute, Cumbrae, and Arran in the distance. Crossing the turnpike road over a malleable iron girder bridge, we reach the station, the terminus of the line. This building is one of the most handsome erections of the kind in Scotland. The total height of the Station is 31 feet, and it is covered with an iron roof. The platform at which the trains stop is 502 feet in length -260 feet being under cover of the station.

The arrangements within the station house are most complete, consisting of handsomely fitted up waiting rooms, dressing rooms, ticket offices, store rooms, &c. Accommodation has also been provided for the station master, a dwelling house having been erected over the ticket office. The goods sheds are being constructed to the northward of the passenger station, and are reached by a ‘back shunt’ which again leads on to a ‘low level’ line of rails laid direct to the end of the Pier. Invalids can thus be conveyed alongside the steamboat, if necessary, without leaving the railway carriage. Passing out of the passenger station, the traveller finds himself upon the substantial new pier at Wemyss Bay.  The wooden portion of this pier, which begins at low-water mark , is 500 feet long by 80 broad, and down the centre are erected strong palisades for the protection of passengers during stormy weather. The pier is formed of greenheart timber and planked with red pine. The contractor was Mr James Young, Sunderland.

Swift and elegant steamers are to run in connection with the trains between Largs, Millport, Arran, Innellan, Toward Point, Rothesay, Kyles of Bute, Loch Fyne and other watering places on the Firth. The distance between Glasgow and Rothesay by rail and boat will, it is believed, be accomplished in about an hour and three-quarters. 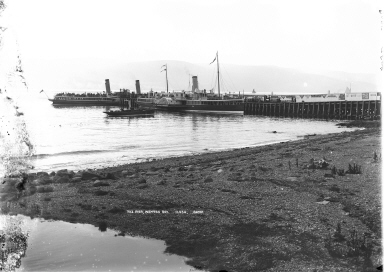 The Marchioness of Lorne in the Millport berth, and P.S. Ivanhoe in the end berth.
The steam launch is possibly The Snark.

The engineers of the railway were Messrs Roberts, Forman and McCall, Glasgow; the architects Messrs Strang, Keyden and Son. Mr James Keyden secretary; the contractors for the line, station &c. Messrs Young & McCall, A & K McDonald and Hugh Kennedy; Mr James Young, Sunderland for the erection of the pier; Mr Stewart, Kilmarnock, Messrs James Goodwin & Co., Ardrossan, for the iron girders for the bridges and Messrs Stephens & Sons, Darlington Works, Southwark, London, for the signals. The rails for the permanent way, together with the chairs upon which they rest, were supplied by the Railway Company. Mr Sloan acted as resident engineer and Mr Speed as inspector of works. The total cost of construction of the railway, together with the purchase of the land through which it passes. may be roughly estimated at £155,000.

On the arrival of the excursion train yesterday afternoon at Wemyss Bay, which was reached in 32 minutes from Greenock, including stopping at Ravenscraig, Dunrod and Inverkip, the company partook of refreshments at Mr Cook’s hotel, and danced on the pier, and afterwards in the station (rain having set in) to the excellent music of the quadrille band of Mr Adams, of Glasgow. The return train reached this at six o’clock. It was intended that a steamer should have conveyed the guests to Arran; but in consequence of the weather, and the large concourse of excursionists, the idea was abandoned.